Our Solar Deity the “Sun” enters into each zodiac space once annually, there by also entering into a realm of the Spiritual Hierarchies. The Sun, soon to leave Sagittarius, the dwelling space for the Spiritual Hierarchy of the Archai (Spirits of Personality), will soon pass over Pluto also on the precipice of leaving Sagittarius, the dwelling space for the Spiritual Hierarchy of the Archai (Spirits of Personality). The Archai render to us a great help and support in our achieving a victory of the human forces of uprightness. You may say, the inner battle raging within, as human and animal forces , vertical and horizontal forces giving the result of final victory of the human forces may be seen in the Centaur, half Man half horse. This upper human part supports our goodness, beauty and truth in loving service to the the world in the Holy Divine Light of the warmth of Christ. I have written previously about our dear Sun and its loving gifts of grace. The Sun offers us the opportunity to “resolve destiny into freedom in its flame, and if freedom is misused, condenses it once more into its own active substance” (Steiner, R.). We may also look at Pluto as the planet that calls forth our will – impulse. “Pluto is initiative and will, but of a kind which can shake the very foundations of the Solar family”. (Sucher, W.)

We may ask ourselves how well am I standing in my uprightness, with good thoughts, good words and good deeds, brought forth with loving kindness? Am I using my freedom constructively that as Pluto shores up my initiative and will; am I willing to, or have I risen to the occasion of goodness, love and warmth toward the world, toward myself?

Capricorn, for the Sun and Pluto bring us into a close relationship with the Arch Angels, The Spirits of Light. As we have recently birthed forth from the Twelve Holy Nights Sergei Prokofieff explains, “They are also the heavenly guardians and inspirers of the Twelve Holy Nights, whose position in the course of the year stands under the influence of the forces from the region of the Goat.” The Christ-Sun rises every time from year to year with the help of Arch Angel Michael overcoming the dragon. We could ask here what is destino asking of us now in this Light of the Sun, with the supporting initiative and will forces from Pluto? Sergei Prokofieff says, ” In modern times, it is particularly necessary for man to come into contact with the sphere of the Arch Angels in sleep; and for this he must attain the greatest possible spiritualization of his words, his faculty of speech, during the waking life of day (GA 222,11.3.1923). The forces streaming from the region of the Goat (Capricorn) can especially help him here, for they have at all times inspired men in the founding of spiritual world-conceptions (GA 151, 22.1.1914).”

Saturn is en route to Aquarius, the dwelling space for the Spiritual Hierarchy of the Angels, ‘the Sons of Life’. Saturn brings us Cosmic Memory. Rudolf Steiner offers this;

Saturn presents himself to us as the heavenly individuality who has steadfastly participated in whatever has come to pass in our planetary system and has faithfully preserved it in his cosmic memory. He is silent about the cosmic Present. He receives the things of the cosmic Present into himself and works upon them in his life of spirit and soul. True, the hosts of Beings indwelling Saturn lend their attention to the outer universe, but mutely and silently they receive the happenings in the universe into the realm of soul, and they speak only of past cosmic events.
Saturn speaks unceasingly of the past of the planetary system with such inner warmth and zest that intimate acquaintance with what he says can be dangerous. For the devotion with which he tells of past happenings in the universe arouses in us an overwhelming love for the cosmic past. Saturn is the constant tempter of those who listen to his secrets; he tempts them to give little heed to earthly affairs of today and to immerse themselves in what the Earth once was. Above all, Saturn speaks graphically about what the Earth was before it became Earth, and for this reason he is the planet who makes the past unendingly dear to us. Those who have a particular inclination towards Saturn in earthly existence are people who like to be gazing always into the past, who are opposed to progress, who ever and again want to bring back the past. These indications give some idea of the individuality, the individual character, of Saturn.

I wonder as Saturn moves into Aquarius, in the realm of the Angels, is he setting the stage for an opportunity to learn from the past? Each Angel reveals to man his most intimate spiritual ideal, the highest, ideal purpose of his spiritual strivings: ‘It is indeed as if, from the beginning of his earthly wanderings, man were able to look up to a sublime Spirit, his spiritual archetype or model.’ (GA 105, 6.8.1908). Is our aspiration ‘Christ”? For some yes it is! Saturn reminding us of the Cosmic Memory stored within of the Christ Being and how humanity may continue to evolve into Spiritual Beings of Love and Freedom.

During our waking life of day let’s take the blessings gifted from the Arch Angels in our sleep of attaining the greatest possible spiritualization of our words, our faculty of speech. Along with the inspiration from Capricorn in the founding of spiritual world-conceptions, what model is Saturn showing us from his Cosmic Memory through the Angels of our highest potential? We have the opportunity to tap into the energy of potential and possibility. What does our speech reveal about us? Consider asking your Angel what is your most intimate spiritual ideal, the highest, ideal purpose of spiritual strivings and listen carefully for the answer in your Heart of Hearts…

This writing was inspired by my reading this contemplation called “The Birth of Joy”.

The Birth of Joy
Not only do we celebrate the Three Kings on Epiphany, we also celebrate the Epiphany in the river Jordan- The baptism of Jesus. Because just like the Star of Grace that blessed the kings with its light, the Holy Spirit blessed Jesus with Christ’s light in the river Jordan.
And yet, as important as the baptism of Jesus is, being blessed by the light would be nothing on its own. Without Jesus giving himself to the death on the cross for the life of the world, the light He received at the baptism would have no meaning. Without the three kings being able to give their gifts to the Holy Child, receiving the light of the Star would have been for naught. The point is, the gifts we receive only become meaningful in as much as we are able to give back.
For all Epiphanies lead to one thing: the joy of giving something, of offering something, however humble, that has meaning for someone. Let us remember, that our old age is fulfilled in the end, not by what we have achieved or received, our lives are fulfilled only by the spiritual joy of giving for the life of the world.
Dear friends, in these times of political turmoil, unsolvable fears and anxieties about the future, epidemics of terror and violent oppression across the globe, let us remember again that the real world is not what we see on the news. Let us remember that the true world is being brought to life in this painful darkness by the Christ-filled giving of the human heart.

This contemplation by Rev. Evans was inspired by The Baptism. 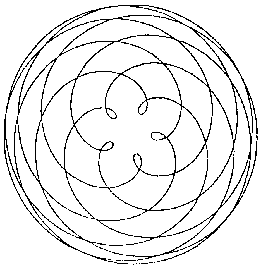